In my previous blog post, I walked through the basics of the AWS Global Infrastructure. Understanding these concepts is foundational for understanding the AWS Virtual Private Cloud (VPC) and how it enables advanced networking capabilities for your AWS resources. A VPC is a logically isolated virtual network, spanning an entire AWS Region, where your EC2 instances are launched. A VPC is primarily concerned with enabling the following capabilities:

Every AWS account created after Dec. 4 2013 supports VPCs and these accounts are assigned a default VPC in every AWS Region. These default VPCs are designed to make it easy for AWS users to set up networking for their EC2 instances. In the rest of this post, I will walk you through what a default VPC looks like in the AWS console and highlight important default settings. You’ll start in the “VPC Dashboard” in your AWS console, which provides an overall view of the components that are available as part of your VPC footprint. Note that the basic components I mentioned earlier will already be provisioned as part of the default VPC that is assigned to every AWS account for every region. 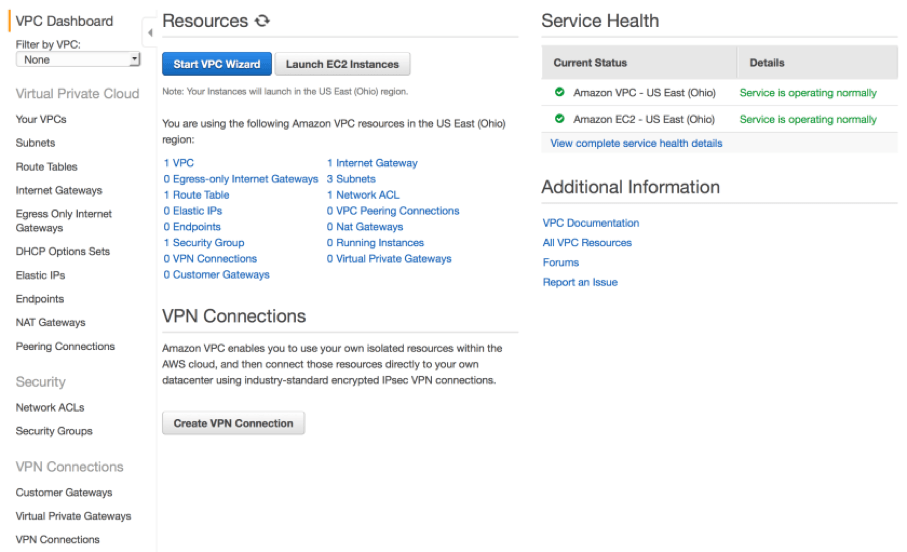 Every VPC is associated with an IP address range that is part of a Classless Inter-Domain Routing (CIDR) block which will be used to allocated private IP addresses to EC2 instances. AWS recommends that VPCs use private ranges that are defined in RFC 1918. These private ranges are reserved by the Internet Assigned Numbers Authority (IANA) and cannot be routed to the Internet. Different sized ranges with different allocations of IP addresses can be assigned to a VPC depending on need. All default VPCs will be associated with an IPv4 CIDR block with a 172.31.0.0/16 address range. This will give you 65,536 possible IP addresses, minus some AWS reserved addresses. VPCs can be created with smaller CIDR blocks, such as a /20, which would yield 4091 possible addresses.

Frequently, your EC2 instances will require connectivity outside of AWS to the Internet or to a user's corporate network via the use of gateways. For communication with the Internet, a VPC must be attached to an Internet gateway. An Internet gateway is a fully managed AWS service that performs bi-direction source and destination network address translation for your EC2 instances. Optionally, a VPC may use a virtual private gateway to grant instances secure access to a user's corporate network via VPN or direct connect links. Instances in a subnet can also be granted outbound only Internet access through a NAT gateway. A subnet that provides its instances a route to an Internet gateway is considered a public subnet. A private subnet may be in a VPC with an attached Internet gateway but will not have a route to that gateway. In a default VPC, all default subnets are public subnets and will have a route to a default gateway.

I've mentioned routing several times while talking about the Internet gateway. Every VPC is attached to an implicit router. This router is not visible to the user and is fully managed and scaled by AWS. What is visible is the route table associated with each subnet, which is used by the VPC router to determine the allowed routes for outbound network traffic leaving a subnet. Note from the screenshot below that every route table contains a default local route to facilitate communication between instances in the same VPC, even across subnets. This intra-VPC local route is implied and cannot be changed. In the case of the main route table that is associated with a default subnet, there will also be a route out to the Internet via the default gateway for the VPC. 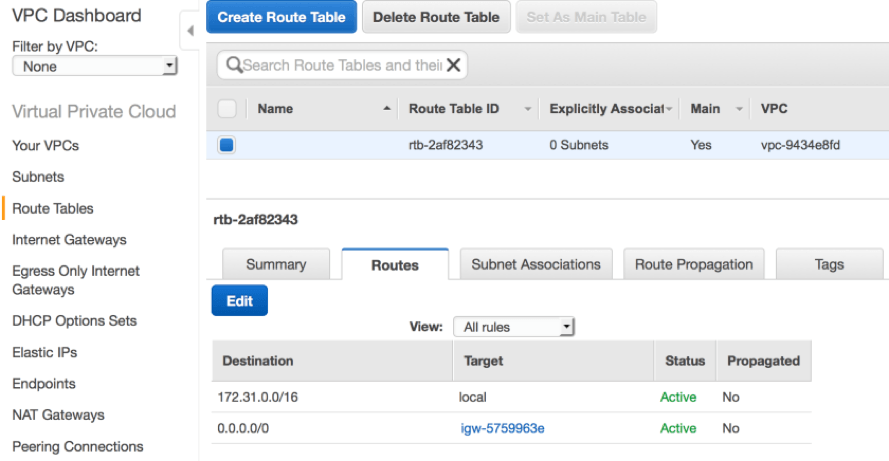 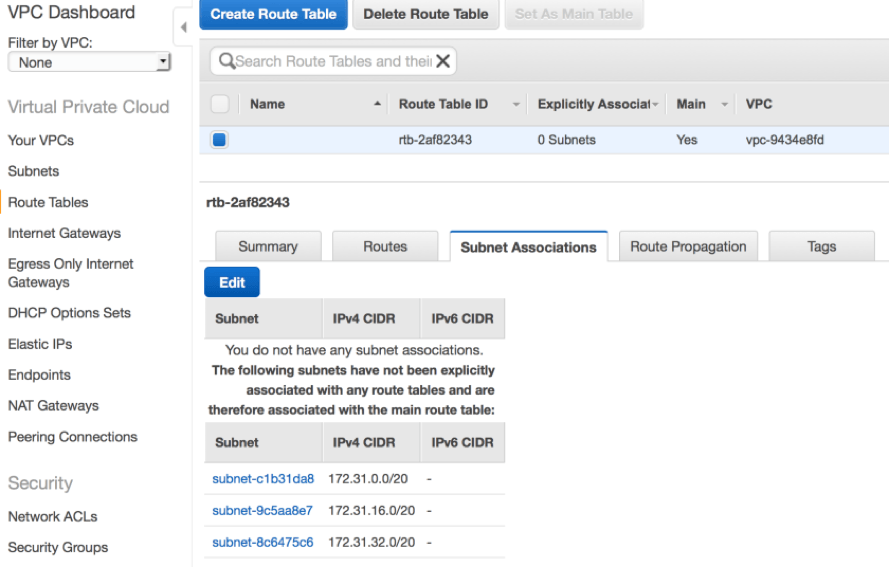 One concern you may have is network security, particularly if all default subnets in a default VPC are public and open to Internet traffic. AWS provides security mechanisms for your instances in the form of network ACLs and security groups. These two mechanisms can work together to provide layered protection for your EC2 instances. An ACL acts as a firewall that controls network traffic in and out of a subnet. You create rules for allowing or denying network traffic for specific protocols, through specific ports and for specific IP address ranges. Network ACLs are stateless and have separate inbound and outbound rules. This means both inbound and outbound rules have to be created to allow certain network traffic to enter the subnet and for responses to go back through. A number is assigned to each rule and all rules are evaluated starting with the lowest numbered rule. When traffic hits the firewall, it is evaluated against the rules in ascending order. As soon as a rule is evaluated that matches the traffic being considered, it is applied regardless of what is indicated in a subsequent rule.

Security groups are considered the first line of defense and consist of a firewall that’s applied at the instance level. This means only instances explicitly associated with a security group will be subject to its rules while all instances in a subnet are impacted by the network ACL applied to that subnet. Similar to ACLs, you create inbound and outbound traffic rules based on protocol, port and source or destination IP. However, there are some differences: 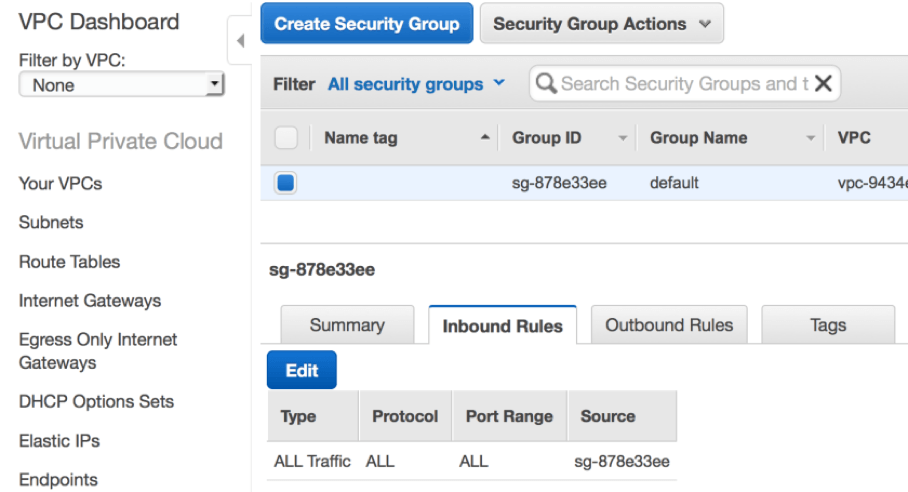 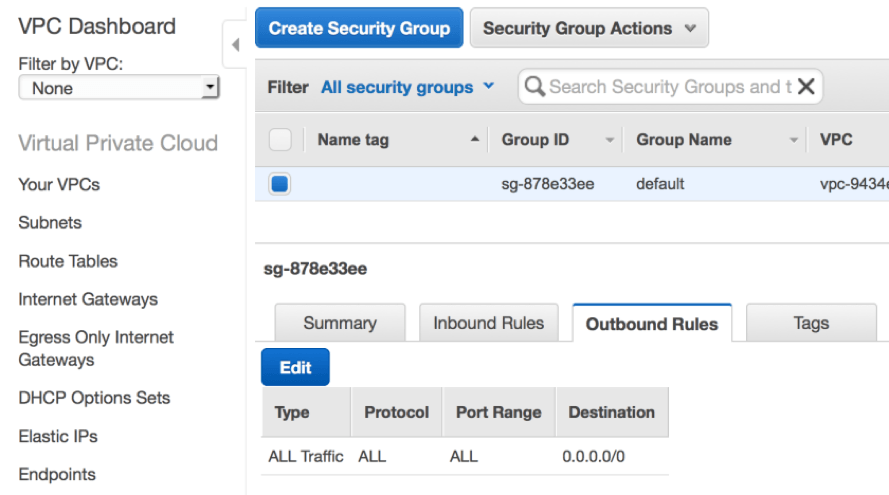 Looking at the outbound rules above, all network traffic out is allowed by the default security group. This includes traffic out to the Internet since a default VPC will have a route to a default internet gateway. While the default security group can be modified, we don’t recommend making any changes to it. Instead, Rackspace recommends creating new security groups that can be attached to resources. As you can imagine, a default VPC may be suitable for a small non-critical single tier application, but is not ideal for a robust production environment. That's often why users will modify their default VPC configurations once they become more familiar with the technology, and even create custom VPCs for production use. Stay tuned for my next blog post, where we’ll do just that, and break down a common use case featuring a custom VPC with a public subnet tier and a private subnet tier. Visit Rackspace for more information about our AWS certified experts and the ways they’re helping customers put AWS to use.