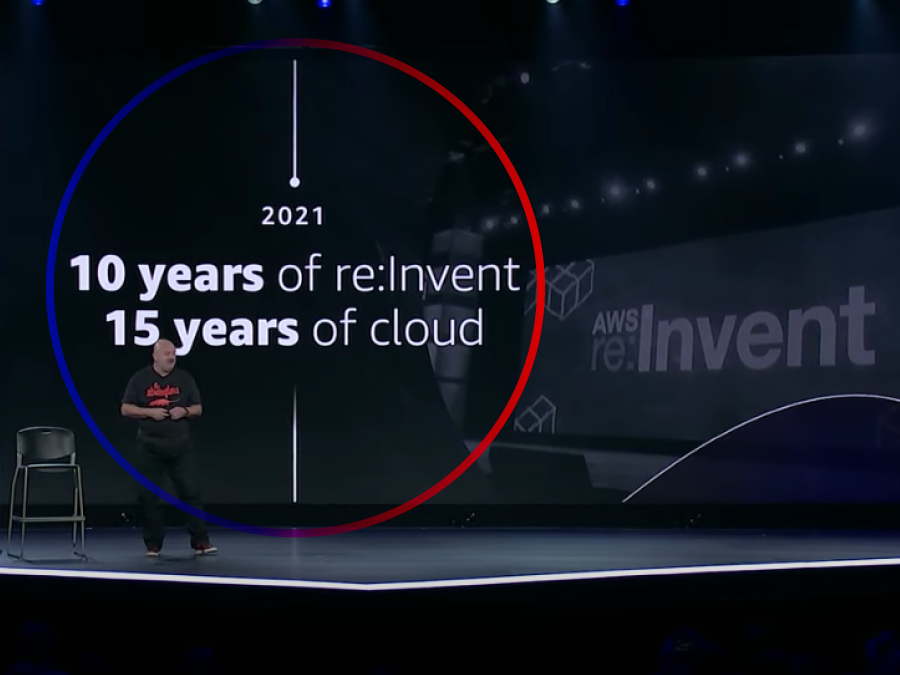 On this penultimate day of AWS re:Invent 2021, Dr. Werner Vogels began his keynote with a look back on not only the last ten years of re:Invent but also to the last 15 years of the cloud. And while we all tend to think of AWS as an always-forward-focused organization, Dr. Vogels used this opportunity to remind us that the past always informs the future.

Dr. Vogels narrated his presentation with call-backs to the wise words he delivered in his first re:Invent keynote, noting that this advice still holds true today. “Log everything” might be obvious to cloud developers today, but it evolved from lessons learned a decade ago as we transformed our workloads from server-centric to service-centric. His advice from that first keynote to “build systems the way you always wanted to, but never could” is a goal realized by many AWS developers today, no longer constrained by bare-metal boxes in data centers.

Dr. Vogels began his presentation with a look-back to 2006, noting that before cloud, innovation felt constrained by hardware, big budgets, hiring, and all the groundwork that had to be laid for every product before it would even see any development. As Dr. Vogels explained, “Cloud made everything a programmable resource,” from networking to storage, to load balancers, and even compute. With cloud, you could now create a resource with a few lines of code or a few mouse clicks in a console.

The first product announcement in this keynote came on the heels of a look-back to the evolution of Amazon EC2, from a small group of just three instant sizes in one family back in 2006 to dozens of instance types across more than five different families. In addition, Amazon announced today the availability of Amazon EC2 M1 Mac Instances, available in preview.

Speaking on the global AWS footprint, Dr. Vogels highlighted the current state of the AWS cloud: 25 Regions, 81 Availability Zones, 14 US Local Zones, and 310 Points of Presence, all across six continents. [SA1]

This year, AWS will add 30 Local Zones in Europe, Africa, Asia, and Australia; an additional nine Regions will also be available over the next two years.

ConstructHub is a registry of open-source construct libraries for cloud developers. Each construct is a reusable block of Cloud Development Kit (CDK) code and is available for CDK, CDK for Kubernetes (CDK8s), and CDK for Terraform (CDKtf). Each code block solves different problems, such as container monitoring, provisioning, compliance, security, and more.

For over six years, the five pillars of the Well-Architected Framework have guided developers, architects, and customers in creating robust and well-architected workloads in AWS. Today, Dr. Vogels announced a new sixth pillar: Sustainability. The sustainability pillar will guide customers to balance security, cost, performance, reliability, and operational excellence with sustainability outcomes for their cloud workloads. Under the guidance of sustainability, reducing resources consumed translates into efficiencies across the workload and has a net positive environmental impact.

The significant change for version 2 of the AWS CDK is consolidating the Construct Library into a single package (aws-cdk-lib), eliminating the need to download multiple packages. In addition, AWS CDK v2 only contains stable packages and includes developer productivity improvements such as CDK API reference refresh and other quality of life improvements.

Massively Online games have been around for decades, but a project like New World could only have been built in the cloud. And this was the perfect way to wrap up on the over-arching theme of this keynote: a nostalgic look back on Amazon’s cloud journey, but with a very focused eye on the future.

What started as a single service (SQS) 8 years before the first re:Invent has grown to over 200 products and services, and advice to architects for the 21st century that is as relevant to developers today as it was at that very first keynote in 2006: build for fault-tolerance, security, scalability, performance, cost-efficiency, and sustainability.

Rackspace Technology is proud to be an “all-in” AWS Partner Network (APN) Premier Consulting Partner that has deep AWS expertise and scalability to take on the most complex AWS projects.