This is not another article detailing the shortage of women in IT. This is an article about solving for it.

If you’re looking for a magic bullet, there isn’t one. Across the industry, highly skilled IT candidates are scarce, and women make up only a small percentage of that qualified pool. And within that very small pool, we need to not only consider gender, but also look at generational, cultural and lifestyle differences to find the right hire.

According to an Indeed survey, tech workers place high value on diversity in the workplace (87%) and culture (85%). Though pay and advancement top the values list across generations, millennials are more concerned with things like culture and work/life balance. And while a Harris Poll found that 39% of the general workforce population values acceptance and the freedom to be their true selves, that number jumps to 48% among millennials.

In the long run, focusing on gender-independent preferences will take your recruiting efforts further. Just like their counterparts, women in IT want to be seen for their work, their work ethic and their work abilities. As recruiters, it’s our job to hire for skill sets and passion, not to fill a seat with a woman.

A commitment to these employee values needs to flow from the recruiting process through to retention. In 2019, iCIMS reported that it took an average of 80 days to fill an application developer position. That’s up from 55 days in 2016, and that number is projected to keep rising. Further, iCIMS reported that tech positions in general take twice as long to fill as other roles. These are often pivotal roles required for executing on crucial business priorities, like cloud, artificial intelligence (AI), edge computing and IoT — initiatives that generate revenue and drive innovation.

Your goal is to be a destination employer — a place to build a career, not just a stop on a resume. And this presents another obstacle to the representation of women in IT: retaining hires. The Indeed survey mentioned above reveals that women leave the industry at a 45% higher rate than men, in an industry with an above-average turnover rate of 13.7%.

Not surprisingly, women leave for the same reasons as men. Both identify lack of career growth and advancement opportunities as the top reason for leaving. However, nearly half of women in tech report that they leave because they don’t believe that they have the same advancement opportunities as men. Millennial women, in particular, are more likely to leave a job because of a lack of diversity or an absence of female leadership. As recruiters, our jobs don’t stop at the signed offer letter. The same amount of effort that we put into finding the right initial fit for these highly skilled professionals needs to be applied toward creating an environment in which they want to stay and grow — whether the employee is male or female.

What recruiters can do

We can’t flip a switch and instantly increase diversity on tech teams, but recruiters as a group can work towards diversity by embracing a variety of strategies and tactics. Diversity and inclusion efforts must be holistic. The approach will vary from business to business, but should include pieces of the following elements:

Diversity impacts your bottom line. Getting the best fit for critical IT roles helps you lay the foundation for your future success. A Boston Consulting Group study found that on average, startups that were founded or co-founded by women raised less than half as much funding as male-led companies. However, while male-led companies only brought back 31 cents per dollar invested, female-led companies more than doubled that at 78 cents per dollar invested. When the Wall Street Journal dug into the S&P 500, they found that the top 20 most-diverse companies had an average annual return of 10% with a 12% profit margin over five years, compared to 4.2% return and 8% margin for the 20 least-diverse companies.

That higher financial return is credited to the diversity of thought, life experience and professional history that diverse voices bring to discussions around usability, product features and consumer preferences. In another Boston Consulting Group study, organizations with highly diverse management teams reported their innovation revenue as 45% of total revenue, versus just 26% in companies with below-average leadership diversity.

And the biggest payback? Less effort going forward. Women want to be around strong women — all of us do. The previously mentioned Harris Poll also reports that half of surveyed workers prefer to work at a female-led company. These companies are seen as more purpose-driven and likely to offer better benefits and opportunities for advancement. The street cred that comes from having women in positions of leadership and highly represented in your workforce helps you organically attract more women and candidates with diverse backgrounds. As potential candidates — male and female — research your organization on LinkedIn, search your brand, and browse your employee pages, they’ll naturally be attracted to working with and being mentored by fulfilled, thriving professionals that represent a kaleidoscope of experience.

In summary, stop looking for women candidates and start creating environments and opportunities that bring women and other diverse candidates knocking on your door. 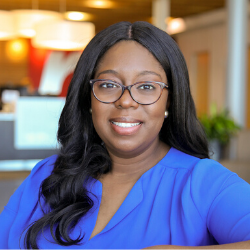 Maureen Oyiriaru is an experienced talent acquisition professional with over 10 years of Fortune 500 and start-up talent acquisition experience. Maureen is currently employed by Rackspace as a Sr. Recruiter Business Operations, Corporate Services and Technology. In her roles she is charged with partnering with hiring managers to ensure we bring top talent to Rackspace through the deployment and integration of talent management best practices. Maureen provides a practical approach to recruiting focusing on organization, leadership development and candidate experience. Maureen earned her BBA with an emphasis in Management Information Systems and International Business from Baylor University (2000) and Masters of Science in Healthcare Administration from University of Maryland, University College (2013).   While working through her undergraduate studies, Maureen realized that she has a passion for working with people to assist with making career moves and quickly made the switch into Talent Acquisition. Making a career change from a Woman in Tech, to hiring Women in Tech, she has also made it a priority to contribute to the world by being involved in her community through volunteerism. She is an active member of Sigma Gamma Rho Sorority, Inc.,   Jack and Jill of America, Inc.,  The Links, Incorporated. Maureen is most proud of her family. Married to Daniel for 14 years and mother to two beautiful girls, Miranda and Delaney, they inspire her to live life intentional and balanced.

Read more about Maureen Oyiriaru
×
You are using an outdated browser and are receiving a degraded experience. Please switch to the latest version of Microsoft Edge, Mozilla Firefox, Safari or Google Chrome. [Dismiss]