Having a Wales of a Time at GoCompare 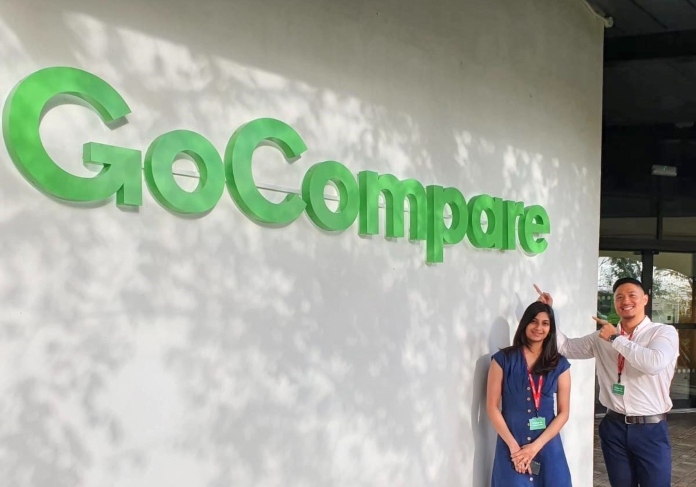 Who said excitement and craziness don’t go hand in hand?

The excitement is all related to a work exchange programme with the Newport headquartered GoCompare, a data-led FinTech, that allows consumers to identify the best financial deals. Earlier this year, two employees from GoCompare’s GoFurther Academy visited Rackspace for a two-week work exchange programme, to learn about us and what we do. And following that we (Trisha & Enrico) visited GoCompare in Wales for a two-week placement allowing us to experience an award-winning culture much like Rackspace’s.

Stepping into the unknown

On our induction day we learned about the three verticals that make up the GoCo Group which changed our perception of the business. The verticals are:

The aim of the placement is to allow both GoCompare and Rackspace to show employees the breadth of career opportunities available to them and spark excitement.

So, you’re telling me it’s more than just software engineers?

Then it was time to see what really makes up the business behind the tenor with the funky moustache. Compliance was our first stop. In a nutshell, it’s simple; follow the rules. What isn’t simple is how the rules may be interpreted and ensuring that laws are adhered to along with meeting industry regulations and standards. If these are broken, well, let’s just say GoCompare would stop comparing.

After this we headed over to the Creative Studio to learn about all the goodness that exists in design. We discovered that there is a great deal of planning, funding and effort required to produce an advert. We sat in on a conversation about everything needed to shoot an ad on a tropical island. And have you ever thought how a website landing page needs super relevant search words? Digital Marketing explained this and much more, including the importance of quality scores.

In the Partnerships Department we saw how information was captured to output the most relevant providers to a customer during the comparing phase. For example, over the age of 50 and looking for car insurance? Congratulations, you’ll only unlock specific providers available just to you. We then visited the world of Project Management which was the most familiar to us, having previously worked with the Rackspace equivalent. We found this session the most relatable. We spoke about projects that integrated Azure and interestingly a previous project which was done hand-in-hand with Rackspace.

“This guy is probably watching us like we’re idiots,” was what we were all thinking throughout the entire Escape Rooms session.

GoCompare kindly scheduled a day to explore Cardiff, visit Escape Rooms and have dinner with the team. The Escape Rooms experience will always be remembered! We were divided into two teams and tackled different themed rooms. Twenty minutes in, without a single clue unlocked, we began to think, “Is this really that difficult or … ?”. Thumbs up to those who want to try it, just be wary that it causes you to do some questionable and downright funny things (when you look back at it, that is!). Nevertheless, we managed to escape!

The conversations, the laughter, the panic and the food, all jam packed into one day was really enjoyable.

Going back to the beginning

We catch a glimpse of them and maybe occasionally manage to throw in a hello to none other than the CEO. Well, we were lucky to have time set aside to speak to the-one-and-only Lee Griffin, CEO and co-founder of GoCompare. Lee’s story was not the ‘it all started in my garage’ tale, as he described in detail the time and effort that he put in to building the business. It’s what you would expect from a founder, doing something you enjoy and believe in. It really does pay off as seen by the successful business GoCompare is today.

What do we want? DevOps! When do we want it? Now. So, during our placement we were assigned a project to deliver the next GoCompare website (albeit not production) serving through an Azure pipeline connected to a database. And in the final phase we would add our own GoCompare service. It could be anything, for example comparing the prices of various irons (because who wouldn’t want that?), or maybe offering a temporary car insurance service? We proposed the slogan – ‘GoBeyond, Compare with a difference’. And what was it? A service to invest in start-up businesses. It was perfect in our eyes, you invest in your chosen community for a financial return. The pitch went well with the GoCompare team, so you heard it here first - if you see it implemented!

Wales is a beautiful place

The weather was on our side, so we drove to Brecon Beacons and climbed the pen-y-fan peak. It was the first time for the both of us doing such an activity, and it had us questioning, ‘what have we been doing all our lives?’. We ended up climbing half the mountain, because one of us bailed (no name shall be mentioned). We still had a lot of fun and were taken aback by the stunning views. Second trip anyone?

The planning, effort and success of this work exchange programme involved a huge drive from Milly Blenkin Talent Programme Manager at GoCompare and Rackspace Account Director Adam Butterfield to create this opportunity from scratch. We do hope this programme continues. Thanks also to the whole GoCompare team, specifically those in 1Tech who added to the invaluable experience and a massive thank you to everyone involved.

Learn more about our work with GoCompare.