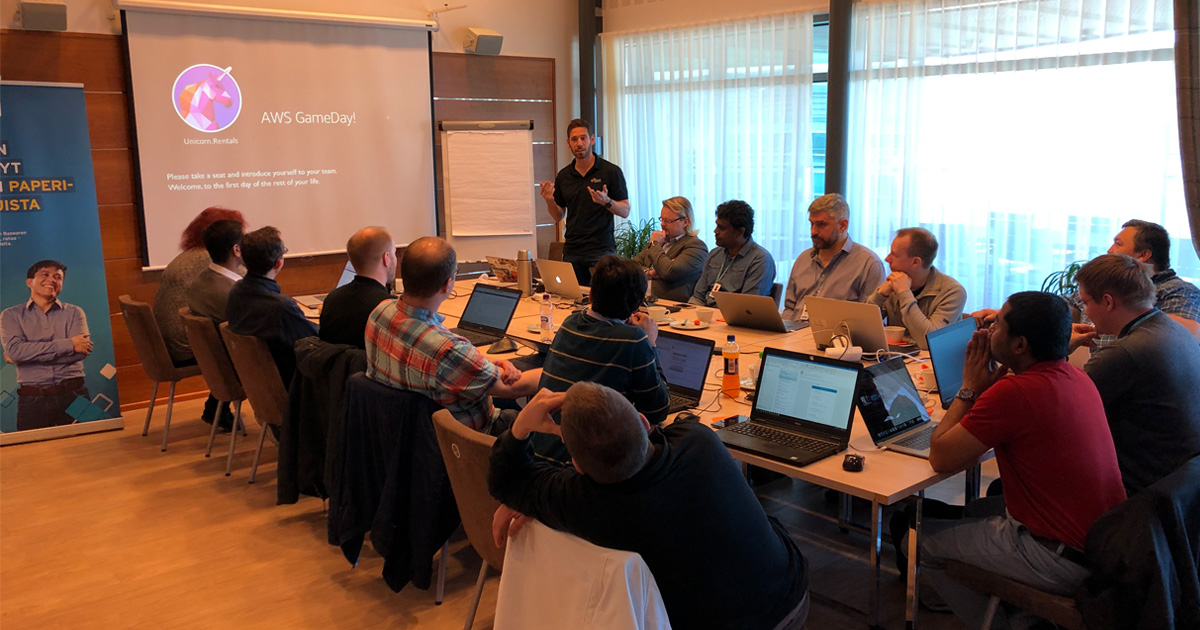 Imagine there was no fear of making mistakes allowing you to build, test and implement solutions in AWS? In addition, you get to work with: colleagues from different departments, your fanatical experienced service partner and your cloud provider. We think it sounds like a winning formula to increase your technical expertise, build strong business relationships and, last but not least an opportunity to have fun!

The first ever partner collaboration AWS GameDay in EMEA took place in May at the Basware offices located in Finland, facilitated by Rackspace. It was a unique experience as AWS were collaborating and teaching alongside us for our customer, Basware.

We felt really privileged to deliver one of the first Microservices Madness sessions to Basware. As a technically astute organisation, they are keen to absorb as much knowledge as possible.

During the day, the Rackspace team were able to demonstrate their deep working knowledge of AWS to the various Basware teams helping each member get the most out of the experience. We even formed our own team 'The Sauna Boys', to participate and make things interesting.

The benefits for Basware, an agile organisation, are that as they are working towards maturing their microservices infrastructure in the near future they were able to experience what it is like first-hand.  By engaging their developers and architects in this GameDay they were able to introduce new ways of approaching the task of breaking down their application. An additional positive was that Basware colleagues from across the organisation who normally don’t work together were able to collaborate, all of this helps to build a culture of co-operation and they were also leveraging services from other teams. And, of course by default the GameDay nurtured a healthy dose of friendly competition.

The friendly competition powered a kind of enthusiasm among the participants which led the day to be considered a real success. As Farid Sharipov, Principle QA Engineer, Performance Engineering at Basware, said: “I have not seen any event before where all participants are fully, actively involved from the start until the very last minute. Some members from my team even worked until the last second. It was a really brilliant event to build teams, work as team and also learn new things.”

The positivity surrounding GameDay was further echoed by AWS, as Dan White, Manager, Partner Solution Architecture UK and Ireland Manager, explained: “Everyone had a great time and were learning at the same time. It was a fun environment with no fear of making mistakes. The GameDay allowed Basware to build, test and implement in the actual environment in real time. The biggest positive being that they [Basware] were all broadening their horizons when it came to seeing what AWS is capable of.

“AWS would love to run more Game Days with Rackspace as it had a hugely positive impact.”

And my Rackspace colleague Keiran Holloway, Lead Infrastructure Engineer, said: “AWS Gamedays provide an immersive learning experience like no other that I’ve experienced in my IT career.  No dull text books or lectures around how a company has implemented ‘technology x’ here. Gamedays provide the opportunity to go head-to-head with your peers against real world cloud concepts. Everyone will learn something on the day and even have a bit of fun in the process.”

“Competing in an AWS Gameday is something which I would recommend to any enterprise seriously considering a cloud adoption strategy.”

While the last word has to come from Basware with Kartik Sharma, Basware’s Director R&D saying: “We have never seen an event where everyone was fully involved from the start to end. One of the most interesting bits of feedback said: ‘As the events were actually happening, it was easy to relate to, rather than assuming some state of applications and then providing solution, and as it was a game it became very competitive very fast.’

“Overall this exercise provided critical learning for applying technologies and services in a real life situation and the significance of following AWS best practices for building a secure and scalable AWS infrastructure. This whole workshop also promotes the idea of working together to solve a common challenge and we really appreciate the support of Rackspace and AWS teams in successfully arranging this event.

“We look forward to many such events in the future too. Let’s play.”

You can view for yourself to see what the day looked like, while if you are looking for more information on AWS GameDays look here.

Defend Your Data From the Ransomware Attacks Targeting Your Backups
April 25th, 2022