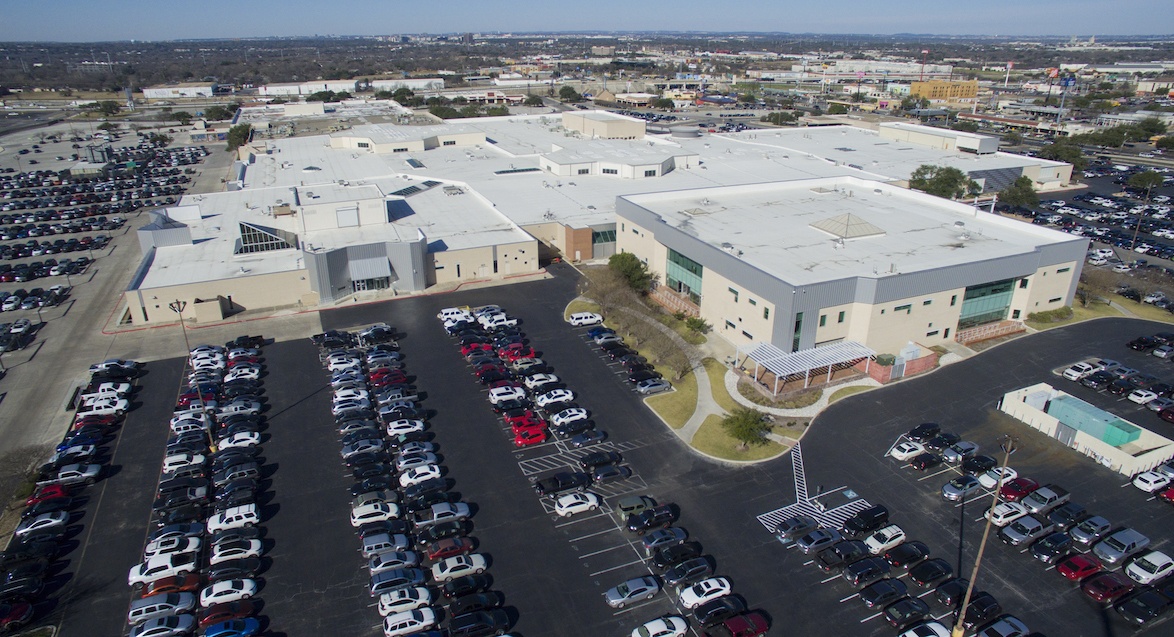 When Rackspace founder Graham Weston had the idea to redevelop the empty and decrepit Windsor Park Mall into a new corporate headquarters, most people “pretty much thought I was crazy,” he told the New York Times in 2012.

By then, however, it was clear that his vision to turn the mall into unique and quirky tech campus a la Google or Microsoft was a success, “one of the country’s largest and quirkiest recycling efforts.” Rackers dubbed it the Castle, in homage to its original name.

In 2012, not only did thousands of Rackers fill roughly half of the Castle’s 1.2 million square feet, giving a shot in the arm to businesses around the campus, but the employee-funded Rackspace Foundation had donated $2.5 million to the seven nearby public schools we call the Magnificent Seven (today, the foundation’s total giving is nearing $5 million).

But the Castle has never been completely full or built out. Much of our recent growth has been global. We now have 36 offices on five continents (and yes, we’re hiring!), employing more than 6,300 people. Yet even as we continue to expand our reach, Rackspace remains committed to San Antonio as our headquarters and source for technical talent.

Here at home, as Rackspace has grown, additional areas within the mall have been renovated — most recently the area known as the Toy Store, which was completed in 2015. As each new phase came online, with the latest and greatest in design and technology, Rackers moved into those locations.

And while our company’s strategy has evolved, our commitment to be the best stewards of our resources has not. That’s why we’re thrilled to announce our first ever sublease of some of the unused space at the Castle.

Launched in 2008 as a personal assistant company, TaskUs today employs more than 16,000 employees around the globe. Its “Frontline First” philosophy has garnered awards for company culture and as a Best Place to Work. TaskUs is led by founders Jasper Weir, who serves as president, and Bryce Maddock, CEO.

TaskUs opened its first San Antonio office in 2017. The team was small at first, but quickly grew to 500 before the year ended. Now, just two years later, San Antonio is home to 2,500 TaskUs teammates.

TaskUs will occupy the area where, as a mall, Mervyn’s was located. It was also the first area renovated and occupied by Rackers, back in 2008, so it’s definitely ready for a refresh. TaskUs has been busy personalizing and “Ridiculizing” the space.

Through the technical community, the two companies struck up a conversation and found a way to meet the needs of TaskUs’s growing workforce while also repurposing unoccupied space at the Castle. Rackspace has been approached in the past about subleasing parts of the property and declined. But TaskUs was different – as a tech company with a similar culture, company leaders felt like it would be a great fit.

While both companies share strong cultures (the TaskUs team embraces “Be Ridiculous” as a core value – a perfect complement to our commitment to Fanatical Experience) and one-of-a-kind office environments, we also share rigorous physical security protocols. Because of this, TaskUs employees will have their own dedicated space, entrances and exits. An interior wall will separate the two work spaces.

“We are excited to create space for another technology company that is as committed to San Antonio as we are,” said Chief People Officer Laura Sue D’Annunzio, “especially one whose drive to give back to the community is as strong as ours. We have similar values and together, I think we’ll have an even greater impact on the technical community and the area surrounding the Castle.”

Windcrest Mayor Dan Reese was a city council member when the Windsor Park Mall first transformed into Rackspace headquarters. The increased economic development and community support from Rackers has been “inspiring,” he said. “Welcoming TaskUs into the space will only multiply the positive effect for our schools and businesses. I look forward to our future together.”

“TaskUs puts a lot of thought and investment into the spaces where our employees work,” said San Antonio Vice President of Operations Marc Blais. “We take into consideration comfort, design accessibility, convenience and security. The new space checks all the boxes, and the San Antonio team is excited for the move.”